In Lieu of the Wuhan Flu 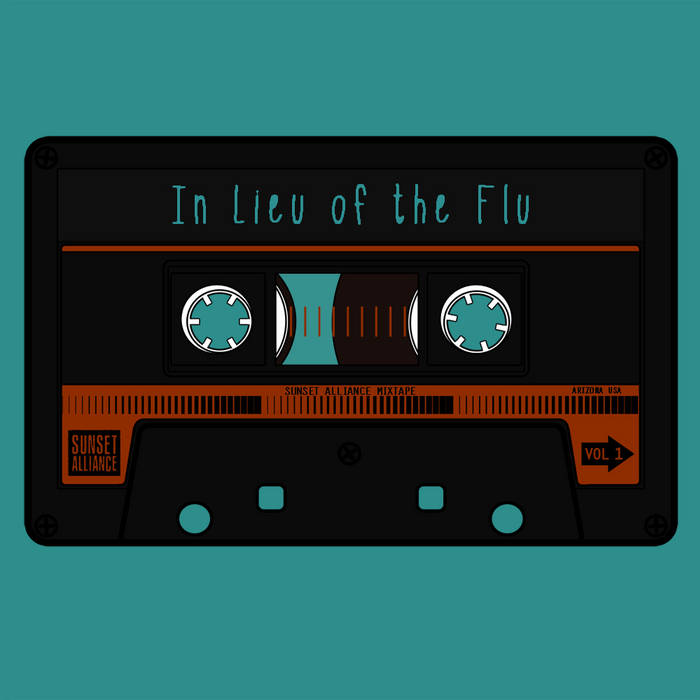 [Disclaimer: Sunset Alliance makes no claims that this mix tape will serve to benefit any person or animal diagnosed or undiagnosed with the flu. Additionally, the FDA, nor does the CDC substantiate any claims--made, or unmade--on this or any other compilation released, or unreleased by this label.]

BEFORE BRAILLE received the most votes in total, this song edged out "The Case Is Out" and "Unfit" and "Proventil" by one vote, "Not Tonight, Not Ever" and "Hooray For Yourself" tied for 3rd.

The Spanish Dagger can be found on The Rumor.

Contenders for the most popular song on HALF VISCONTE'S only full length, "Was It Fear," were the songs "Name," and "Racked & Martyred." That being said, possibly the best song ever written and performed live in the state of Arizona is "MONEY SHOT." If you missed seeing it, you missed something astoundingly fine.

THE PLAYER PIANO received the 2nd highest number of votes. The other songs receiving the most votes were "Mayday," "Scanning Faces," "NJB," and "After the Fact."

"Pi/4" can be found on the self-titled release, and the Japanese import "Satellite." Both records are out-of-print, but few copies can be found under rocks and in barns in different parts of the world. Good luck!
Otherwise available on iTunes/etc.

"Dead David Dancing," "Silence," and "Obvious" led the voting for ROGER OVER & OUT. "DDD" squeezed past them all. The great thing about the Roger Over & Out record is that the songs stand up as strongly now as the day they were written.

Many people don't know that members of Before Braille was the back-up band for Drex and McKane Davis in the studio (along with a 3rd Davis brother, Merek). Drex & McKane have been making great music for many years together & in solo projects, and even let Dave Jensen join their first band for a few months in high school.

FIVESPEED also had votes for "Blood Over Wine," "Dave's Garage," "Justice," and "In the Am."

This track can be found on Fivespeed's first release, the self-titled EP. Please note that there is now an entire remastered version of this album that can only be found on our Bandcamp page. Members of Fivespeed have been quite busy with other projects. If you like the direction of "Trade In Your Halo," and their Virgin Records debut "Morning Over Midnight," look out for the bands Modern Day Infamy, My Darling Murder, and Andy Gerold's "Picking Up the Pieces."

ART FOR STARTERS is Dave Jensen from Before Braille. The double-album "Drugs Made My Favorite Bands, Drugs Ruined My Favorite People," was his first solo work. The songs that got the most votes in this Mix Tape "contest" were "Diction," "Roman Crimes," and "Better Best." That being said, Dave's favorite songs on the record are "Mark So Made," and "Went To Church Instead." And his mom loves, "I Hope Ants Crawl Under Your Eyelids." (Thanks for your input, Mother.)

David J. is NOVI SPLIT. Novi Split is marvelous. Thus, David J. is marvelous. (He truly is). This song had the most votes, but tied for 2nd were three great songs, "Tonight! Tonight!," "I Had You" and "Newborn Life Teething."

All these tracks can be found on "Keep Moving," Novi Split's debut album on Sunset Alliance. But, be sure to check out "Pink in the Sink" on Hush Records. It is also a great full length. Keep Moving will celebrate its 10-year anniversary this year! Crazy.

David also plays in the bands Ill Lit, Kind of Like Spitting, CMG & We Are the Night, and DJ Slavi D.

This song actually tied "Input/Output" with the most votes, but because a cool guy named Hoang voted for this one, his vote was weighted and his selection prevailed. The full length "Input/Output" by THE LETTERPRESS features drums, bass, and bass. No guitars. Jeremy Drysdale, Rajiv Patel and Dustin Carson were quite a 3-piece.

JEFF JOHNREY (known legally as John Jeffrey, is bass player of Yukon Blonde) recently released his masterpiece "Extended Stay" on Sunset Alliance and we couldn't be more prouder than a well-spoken English matriarch who was born on Mothers Day, out of the blue.

LOYAL WIFE is Dave Jensen's new project. He joined forces with Ashley Taylor who was in the live band of Art For Starters and added 3/4th of Awake & Alert to create his dream band. Literally, a dream come true.

Other strong vote-getters were "In Trouble," "GodSlight," and "Not What You Want." What's weird about that is, "Cut the Rope," may be the best song on the record. Go figure.

"Bipolar Bear" got more votes, but it can also be considered a song by "THE RETALIATION FOR WHAT THEY HAVE DONE TO US" so it was disqualified from Mix Tape voting.

This track was recorded by Jason Corman (Mr Fantastical) at his Bumbles Bounce Studio. RAJIV PATEL sorta stopped making music and this EP came together after a long period of musical inactivity...that period, unfortunately has continued. How this album was ever put together and released in a complete form can only be chalked down as...well...I was going to say luck...but I know better. It was a lot of favors from a lot of good people, including Jason Corman, David J., Chuckie Duff, and DPJ. In fact, I believe it was Dave who dug through his house to find an old recording he hadn't heard or seen in 4 years to send to David J's mastering studio at like 2am, and somehow David J. got the mix, (probably an MP3, who knows) polished it, and overnighted to the pressing plant to somehow meet the deadline.

The 5 song EP is a gem and is called "Get Phased."

MR. FANTASTICAL'S "AC/DC Is My Father" edged out "Canada, Canada" in the voting, but we don't care. One cannot be introduced to Jason Corman's madness with anything other than "Canada, Canada." Sorry, we are overruling this vote. Are we setting a dangerous precedent? Yes. Are we proud of this? No. But, we didn't have to tell you we were doing it. We coulda lied. So, at least you know we'll tell you when we flub votes. Have confidence in that, at least. It's more faith than I'm sure all of us have in the current electoral system in the US of A.

Anyway, Jason Corman, is the brains and brawn behind Mr Fantastical (the one-man show!) and he is one of the weirdest and most impressive people we know. But, really he's not that weird until you get to not know him.

This album "Ham Hocks & Guitar Strings" is available online. It could have been marketed as a children's album if it were not for the cuss words. We look forward to more butching, hexing, wrecking and flecking by this man, and we're not sure what that means.

This song tied with "Ode If It Weren't For Cowboy Dan" for the most votes, but this one was chosen for 2 reasons. 1) Most versions of this song have the secret track attached, which is kind of annoying for some listing purposes and this has been edited for all other purposes. 2) It is impossible to eat soup and listen to this track w/o spilling soup all over yourself. Try it.

THE RETALIATION FOR WHAT THEY HAVE DONE TO US was a secret project that consisted of Dave, Kelly, Rajiv, Brandon from Before Braille. It was a mostly-improvizational jam band that had to secret exist as to not be detected by their record label at that time. The album was tracked live in 1 day and mixed in two. After tracking the album, the ability to improv was made more difficult, and Before Braille became much more demanding on the members' time, so the guys called it quits after only 4 shows. The 4th being their CD Release party, supported by Americopa Mantle.

BENINEM, aka Ben Shill has the skills on the mic. Conquering Aspergers Disease and all the critics. Autistic flow in case you didn't know. This song was the highest voted and is featured on Beninem's first single. Beninem is also known for "Santa's Sleigh Is Thumpin'" and "Oneliners."

Expect Beninem to sleigh more tracks in the near future, he's got a ton of gems in the pipeline itchin for fruition.

Compiled by David Jensen and Sunset Allies. Art by DPJ and Quick Stop. Thank you.